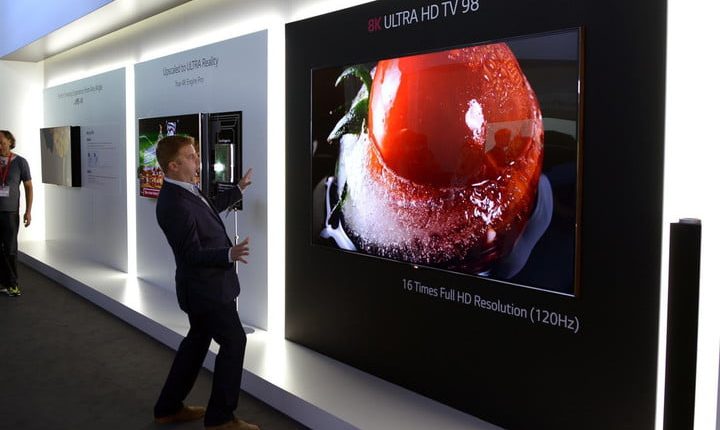 What kind of crazy TVs will we see at CES 2018? Here’s a sneak peek

There’s a ton of tantalizing tech to take in at CES, but let’s face it, folks: TV rules. The world’s largest consumer electronics show has seen a number of TV innovations, with several significant advances (and a few fads, too) unveiled in just the last five years: 4K, curved TVs, bendable TVs, TVs that look like wallpaper, OLEDs, quantum dots, HDR, and even 4K Ultra HD Blu-ray players. Where could brands like Samsung, Sony, LG, and TCL possibly go from here?

The answer is almost always: Up! We generally end up seeing more of everything we love  — higher resolution, bigger screen sizes, better HDR, higher brightness, deeper blacks, and elevated, cutting-edge technologies. Here’s what you can expect in TV at CES 2018.

8K TVs are coming … for real this time

First off, don’t freak out. Your brand-new 4K TV is not about to be rendered obsolete. At this point, 8K TVs are still very much a look-to-the-future technology, but manufacturers are eager to show they are moving past the prototype phase and into the production phase. You may begin to see massive 8K TVs (read: bigger than 90 inches) in heavily guarded areas of high-end electronics stores toward the end of the year. And if you’ve got a fat enough wallet, you could buy one and put it in your home.

We’ve seen 8K TVs in the past — all of them concept displays — but this year big brands will be working hard to send home a message that 8K does make sense in larger screen sizes. We’re already convinced, but will you be?

1080p in the kitchen, 4K HDR everywhere else

Most major TV manufacturers make TVs above the 50-inch screen size exclusively with 4K panels already, but 2018 will see 1080p panels used only in the most bottom-of-the-barrel models. Sure, 4K resolution doesn’t do much for you below the 55-inch mark, but that doesn’t really matter anymore since 4K panels are the new standard and aren’t significantly more expensive to make than 1080p panels.

Now that 4K isn’t really considered a premium anymore, manufacturers will look to premium HDR performance along with peak brightness and black levels in order to make their LED TVs stand out. That’s pretty much all they’ve got to work with, and it’s even more important in 2018 because OLED TVs are getting cheaper and, as they do, the list of reasons to buy LED instead of OLED are rapidly dwindling.

How manufacturers will pull this off is the real trick. LCD displays that rely on LED backlights suffer from poor viewing angles, halos around bright objects on black backgrounds, and blacks that look a little more like gray than black. The only way to make improvements is to make the LCD panels better and the LED backlights better. Can this be done?

The backlight solution is pretty easy: TV makers just need to suck it up and deploy full-array local dimming (FALD) backlight systems in more of their TVs while keeping the prices in check. We may have to deal with slightly thicker TVs as a trade-off, but the performance would be better for a wider array of models. The LCD panel improvements, though? That’s a much harder nut to crack.

Samsung won’t make an OLED TV, but may have something else up its sleeve

Given the rivalry between the two South Korean titans of tech, there is no way in hell Samsung is going to give in and make an OLED TV. To do so, it would not only have to concede its long-held belief that OLED is an inferior long-term technology, it would also have to either build a big OLED panel production facility for its TVs, or tuck its tail between its legs and buy OLED panels from LG, just like Sony — LG’s only OLED competition — does. None of that is happening, trust me.

I do, however, think it is possible Samsung could use a new technology called microLED, which could end up being the company’s answer to OLED.

For those who may have missed it, Samsung introduced its take on microLED within the context of a massive, modular cinema display earlier this year. If history is any indicator, Samsung would want to trickle that commercial tech down to the consumer level. Given that tendency as a clue, it is possible we could see a prototype display of microLED in a consumer-level TV size, and if we do, it would look very strong against OLED — deep blacks, brilliant color, and far superior brightness, all with no burn-in potential.

We’re not the only ones who think this may happen. There’s a breadcrumb trail nearly a mile long being dropped by various reviewers and tech publications. David Katzmaier at CNET is pretty convinced we’ll see microLED in his own “what to expect” piece, and ZDNET Korea broke news that several other publications are picking up.

Yet another clue is the fact that other major manufacturers are looking to microLED as an alternative to OLED dispalys. Apple purchased LuxVue, a microLED company, and rumors are already swirling that the Cupertino, California-based company could skip OLED and go directly to microLED. What’s good enough for mobile displays has usually been good enough for computer displays and TVs — it’s just a matter of scaling them up or, in Samsung’s case, scaling it down.

You can already use proprietary voice control on LG TVs and Samsung TVs, and Sony lets you use Google Assistant to some degree, but voice control hasn’t really hit its stride with TV … yet.

The new year will see all kinds of new voice control tricks. Google Assistant will find its way into more televisions, and it will do more once there. Amazon’s Alexa won’t get left out in the cold, don’t worry. We might even see both in the same TV models.

Soon we’ll be able to call up exactly what we want to watch just by asking for it. We’ll be able to play our content to multiple TVs in the home with the utterance of a few words, and we’ll be able to set alarms, control our smart homes, and more … with words. The TV was always going to become the real hub of the smart home of the future; now we’re going to see it in action.

TCL will bring the heat and we will be watching

China-based electronics outfit TCL came out of nowhere this year and blew me away with its 55-inch P-Series 4K HDR Roku TV. I was so impressed, it listed it as one of the best TVs you could buy this year.

In 2018, I expect TCL to double or triple down on that success. It got the attention it needed to get mentioned in the same breath as Samsung and LG. Now it’s going to run with that notoriety and do something big with it at the show. When it does, I’ll be there to show it to you.

HDMI 2.1 will hide behind the scenes

HDMI 2.1 just came out and it is kind of a big deal — big enough that I wrote a piece explaining everything you need to know. Will we see HDMI 2.1 at the show? Not in the way you might think. I doubt that many, if any, TV manufacturers have had enough time to implement the new standard into their production lines yet, so it seems unlikely we’d see any TVs capable of 4K at 120Hz  or 8K at 60Hz. Still, crazier things have happened.

What I do expect to learn about HDMI 2.1 is in what order we may start to see its potential benefits. My gut says we’ll start with dynamic HDR, move to 8K, and then get to the higher framerates gamers (and Peter Jackson) crave.

Editor’s note: At the time of publishing this article, we have been briefed by a few major TV manufacturers and are aware of what they’ll be bringing to the big show. However, we can’t disclose any details. With that said, most of this article was written before those briefings and, frankly, these predictions are fairly easy to come to with prior CES experience, a little deep technology knowledge (techknowledgy?), and a sense for stitching clues together.

Did you find these tips helpful? Want to know more about any other hack? Please feel free to drop a message and let us know if there’s any specific hack that you wish to learn about. Follow iGadgetHacks on Facebook, Twitter and Google+
4K HDR8KCES 2018OLED TVPremium HDRpremium LED
20
Share FacebookTwitterGoogle+ReddItWhatsAppPinterestEmail

North Korean hackers are behind a cryptocurrency theft: report

Comments
Stay With Us